These Are The Most Beautiful Churches in Bulgaria! 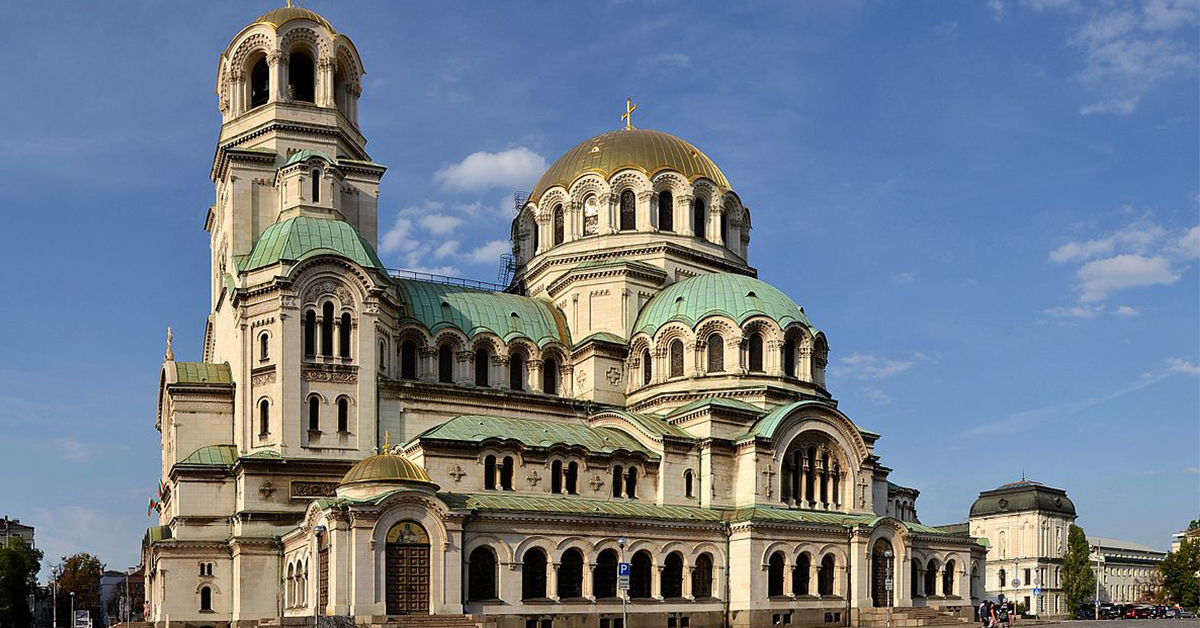 Religion has always played an important role in the development of Bulgaria throughout the centuries. It has stood as a symbol of faith, as a unifier and as a means of preserving the spirit and culture of a nation that withstood 500 years of Ottoman rule. Bulgaria’s rich cultural heritage includes many churches and monasteries. They have survived through the ages and you can bet they’re nothing less than masterpieces. Here are 7 of the most beautiful churches in Bulgaria!

1/ St Alexander Nevsky Cathedral: the main cathedral of the Bulgarian Orthodox Patriarch and one of the symbols of Sofia

Whether you’re religious or not, the Cathedral in Sofia’s central square is a must see if you’re ever visiting the capital. This iconic landmark stands out with its impressive architectural style, size and central dome. It occupies an area of 3100 sq m. and can take up to 10 000 people inside! Amazing, right? The reflection of the golden domes attracts attention from miles away.

Dedicated to the Russian army who took part in the liberation of Bulgaria from a 5-century long Ottoman rule, the Cathedral was named after the personal patron saint of the Russian Emperor of that time, Alexander II.

What can you see inside?

The temple’s interior is decorated with the finest marble, onyx and alabaster in the world! You can see magnificent marble decorations, mural paintings and 82 icons made by Bulgarian, Russian and Czech artists that are no doubt unique. The crypt exhibition showcases a rich collection of religious paintings and relics (over 200) that are considered true masterpieces of Bulgarian religious art. Entry fee is only 2 lv!

The Cathedral is within walking distance of many key tourist attractions and it looks even better at night when it’s illuminated. It’s a popular meeting point for tourists and for many events in Sofia. 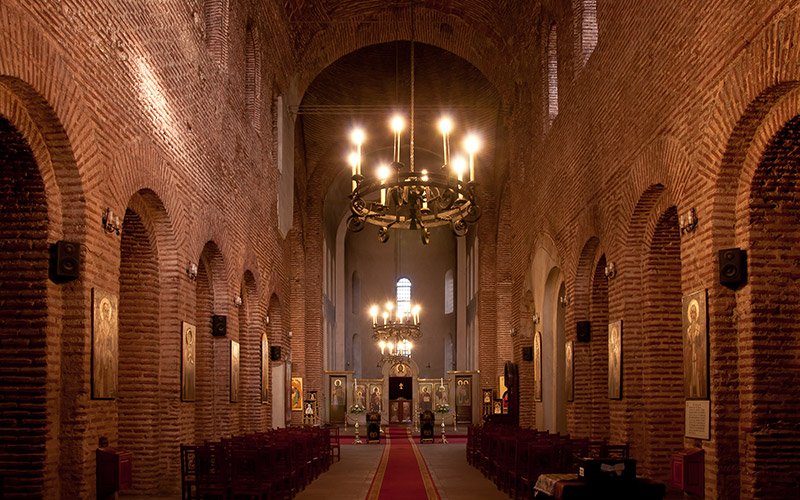 Ever wondered where the name of Bulgaria’s capital originates from? Saint Sofia is one of the oldest churches in Bulgaria and it’s actually the building that gave the city of Sofia its present name. This unique church is one of the most valuable pieces of Early Christian architecture in Southeastern Europe.

It was built in the 6th century when Emperor Justinian sat on the Byzantine throne. It was constructed on top of the foundations of another church from the 4th century, which was the first major Christian church in ancient Serdica.

The church itself, however, is not the main attraction…

There is an underground museum underneath its floor. There you can see remains of the Ancient Necropolis of Serdica where more than 2 centuries of its inhabitants (2nd to 4th century) have been buried! The museum has walkways and stairs of glass so you can see on 3 levels over 50 restored graves and sarcophaguses from different periods. You can also see the foundations of older churches, and there are frescoes and floor mosaics from Roman times (both with floral and geometric design). Entry fee for the museum costs 6 lv.

3/ Church of St Nicholas the Miracle Maker (also known as the Russian Church): a beautiful example of Russian religious architecture 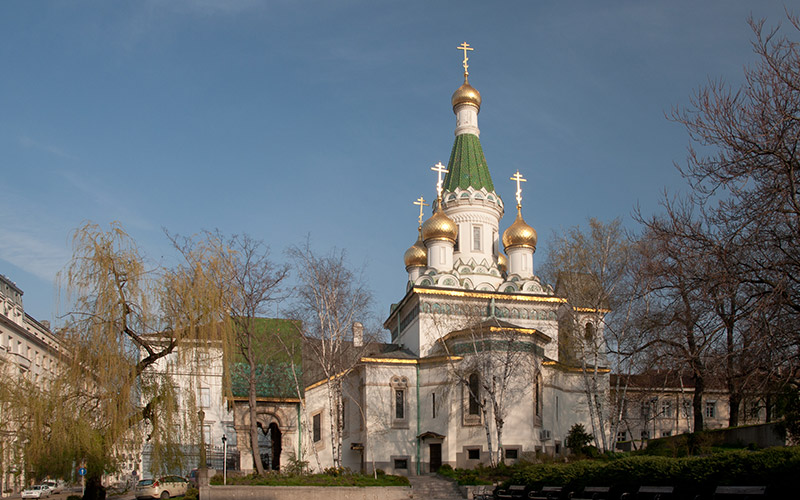 Saint Nicholas Church in Sofia, or simply “the Russian Church”, is a beautiful church in the centre of Sofia. It’s famous for its typical Russian religious architecture and it certainly attracts many visitors with its incredibly complex decoration. There is an old legend about it, stating that by visiting the crypt of the church you can get a wish fulfilled. All you have to do is write your wish on a piece of paper!

A bit of background…

The church was built on the site of the Saray Mosque, which was destroyed after the liberation of Bulgaria by Russia from the Ottoman Empire. It was the official church of the Russian Embassy (located next door) and bears the name of the patron saint of the Emperor who ruled Russia at the time, Nicholas II of Russia. The beautiful design was the work of Soviet architect Michael Preobrazhensky.

The church also happens to be 5 to 10 minutes walk from the Alexander Nevsky Cathedral and it’s a nice opportunity to compare different architectural styles.

4/ Boyana Church: one of the most complete and perfectly preserved monuments of east European medieval art and a protected UNESCO World Heritage Site 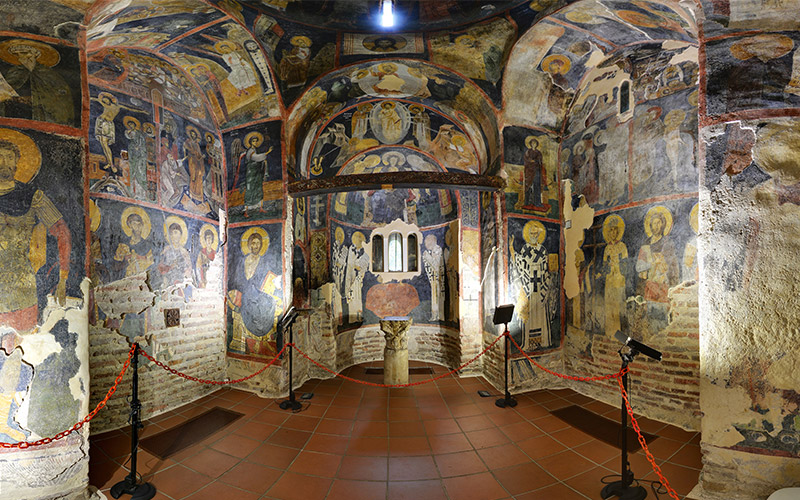 The Boyana Church is located in the forests of Vitosha Mountain, just outside Sofia. The church consists of three buildings – the eastern church built in the 10th century, then enlarged at the beginning of the 13th century by Sevastocrator Kaloyan, and a third church, built in the 19th century with donations from the local community.

The frescoes in the second church, painted in 1259, make it one of the most important collections of medieval paintings. They have probably played a crucial role in the development of medieval Bulgarian and European painting. Who painted them? An unknown team of artists from the Turnovo School of Painting. The innovative approach and revolutionary techniques were groundbreaking at the time – decades ahead of their age!

In order to preserve the fragile state of the frescoes, groups of around only 10 people at a time can enter the church and can stay for just 10 minutes! Entry Fee is 10 lv.

5/ Dormition of the Mother of God Cathedral: one of the most attractive architectural landmarks of Varna 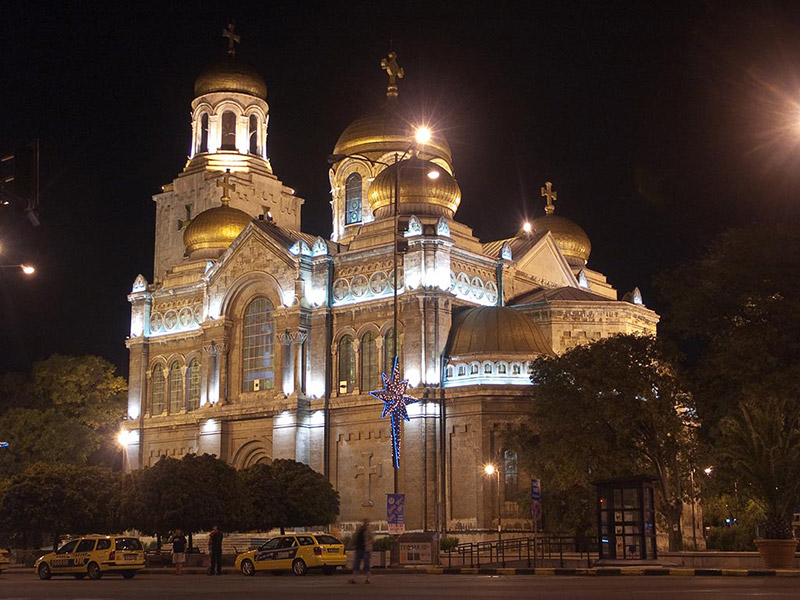 The cathedral is one of the most prominent attractions in the city of Varna. It officially opened in 1886 and is considered an emblem of the town. The cathedral was the first Christian monument in the country to commemorate the bravery of the people who fought and died in the name of freedom during the Russian – Turkish war. It also happens to be the second largest Orthodox cathedral in Bulgaria after the Alexander Nevski Cathedral in Sofia. But that’s not all. Its beauty really speaks for itself!

The frescoes are among the most valuable features of the cathedral as well as the impressive murals which cover the walls on the inside. The decoration of the patriarchal throne and the iconostasis is a true masterpiece of wood carving.

The cathedral through the years

The cathedral has undergone some major changes throughout the years. In the early 2000s, the frescoes in the church were renovated, the domes gilded with gold and silver, and a lighting system was installed, offering a spectacular view of the cathedral at night!

6/ St. St. Constantine and Helena Church: a beautiful church situated in the Old Town of Plovdiv with many rare icons and valuables 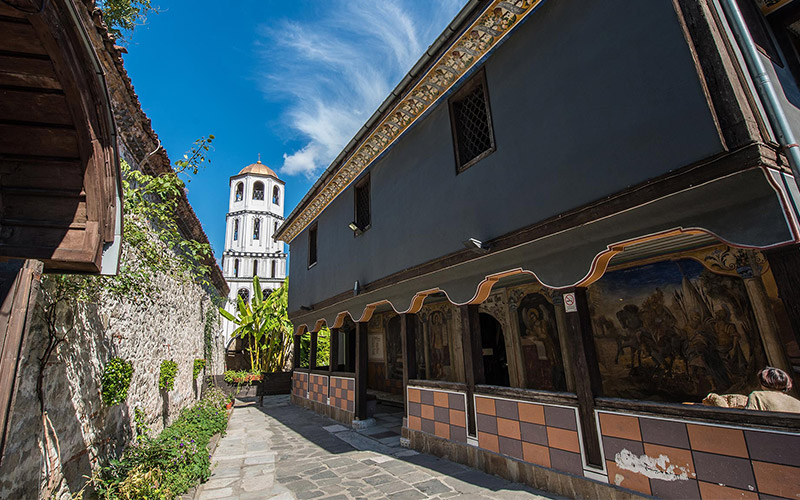 The St. St. Constantine and Helena Church is one of the ancient Christian temples of Plovdiv. A Christian sanctuary was in its place at the beginning of the 4th century. It’s located in the centre of the ancient part of the city, on the very wall of the Acropolis. The church is part of the Architectural and Historical reserve of the Old Town of Plovdiv.

The Bulgarian master Yoan Paskulis from Metsovo made the unique church iconostasis in “Vienna Style”. Masters of one of the most famous Bulgarian Iconographic Schools, the Debar School, painted the magnificent frescoes and icons. One of them is Zachary Zograf, who also worked on the Bachkovo Monastery.

The church has protected a lot of valuables from the middle ages, such as icon paintings. One of them is the small wonder icon of St. St. Constantine and Helena. You can see this icon and many others in the icon gallery located in the yard of the church. During the Ottoman rule ,the church was repeatedly demolished and then rebuilt using funds of wealthy local citizens.

7/ The Memorial Church of the Birth of Christ: a stunning Orthodox church built in typical Russian architectural style

The Memorial Church in Shipka is a memorial for all the heroes who died freeing Bulgaria from Ottoman rule in 1878. It’s located near the town of Shipka high up in Stara Planina. It’s a splendid piece of late 19th century Russian style architecture. The gold covered domes shine amazingly even from the distance. The church used to be part of a larger monastery in the past. Now, the area surrounding the church has been turned into a large, beautiful garden. The coffee shop in the entrance garden has one of the best views of the church!

By now you’re no doubt amazed by all the incredible churches that can be found in Bulgaria! If you’re a fan of the imposing beauty of monasteries, check out our guide to some of the most beautiful monasteries near Plovdiv > Keep in mind that in person they are even more beautiful and a trip down here will certainly prove our point…