5 Reasons To Visit Plovdiv: The Oldest City In Europe 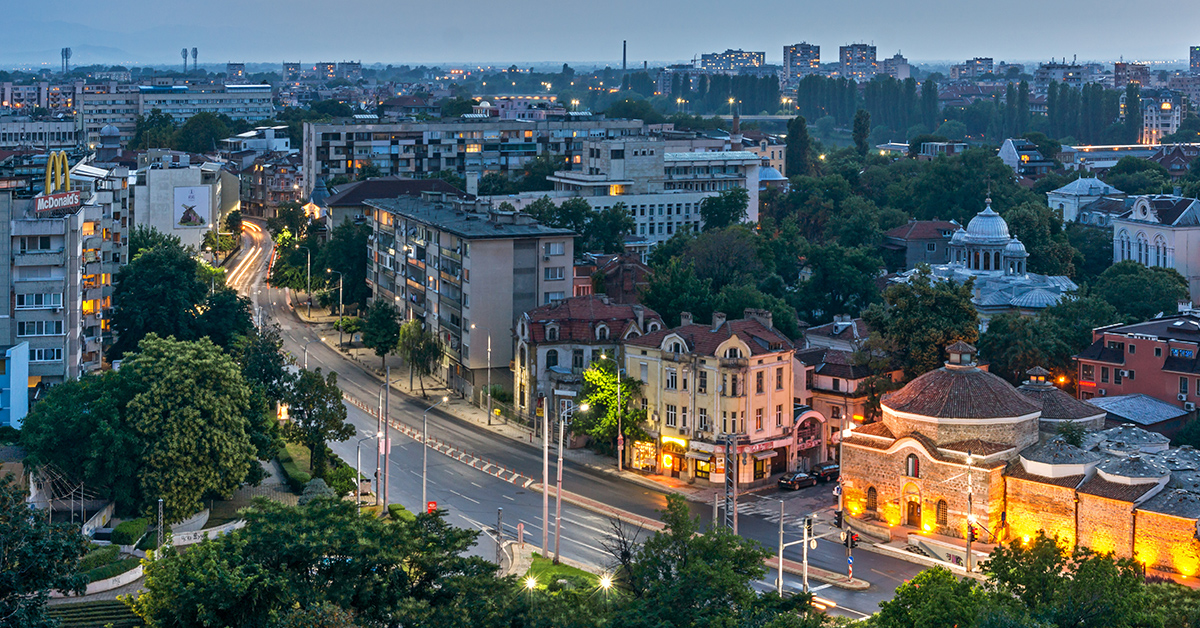 The history of Plovdiv goes back to 6000 BC which makes the city over 8000 years old! But the rich historical past of this unique city isn’t locked away in a museum – quite the opposite. It’s on display almost everywhere in the city and is one of the main reasons to visit Plovdiv.

Plovdiv is a crossroads of ancient cultures. The cobblestoned streets in the Old Town tell many stories of the city’s long history: originally a Thracian settlement, later a Roman city, then Byzantine, before becoming part of the Ottoman empire, and to finally become part of Bulgaria. Although Plovdiv has been modernized in recent years, it has retained the perfect balance between being a growing European cultural capital and a really ancient city, proudly carrying its cultural heritage.

Here are 5 reasons why you should visit Plovdiv – one of Europe’s oldest continuously inhabited cities.

1/ The Old Town of Plovdiv is a Living Museum 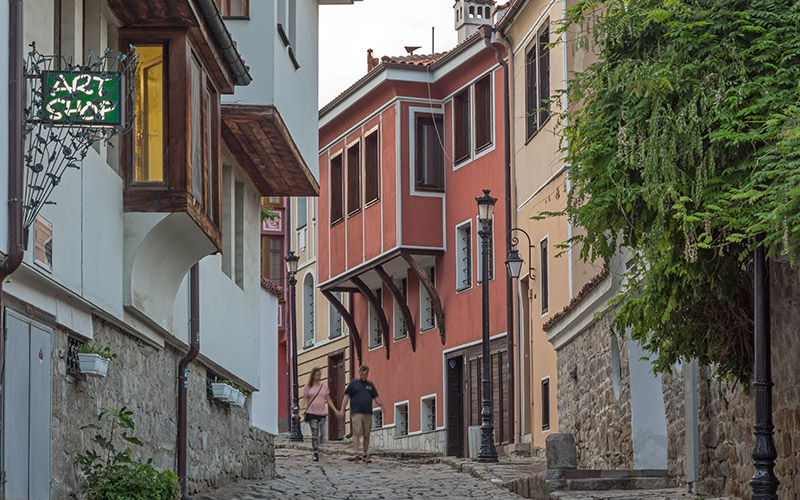 Strolling down the Old Town of Plovdiv, you’d almost feel as if you are in a history book. There are buildings and traces of almost every historical period.

The Historical Reserve of the Old Town really is a one-of-a-kind place. You can walk through the cobblestone streets, see the old fortress gate Hisar Kapia (a structure that survived the Middle Ages), the architectural masterpieces from the National Revival Period (18-19th century) and an Ancient Roman Theatre built more than 2000 years ago (still in use today!). 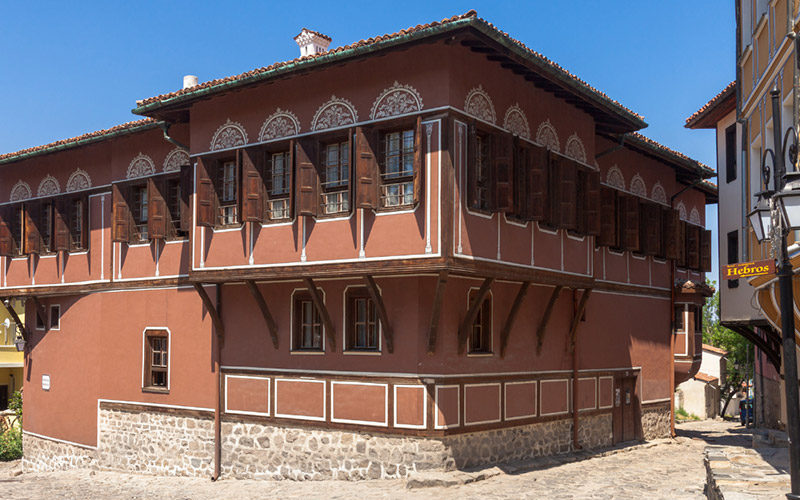 Bulgarian National Revival architecture came from a cultural movement started by Bulgarians as an attempt to regain their identity from the Ottomans. Many of these houses are now museums that are open to the public.

Wealthy tradesmen built the iconic houses in the Old Town. They were greatly influenced by European culture during their travels to countries like Austria, France, Turkey and Greece. They built the houses big like mansions: colourful and with a lot of decoration (floral motifs painted on walls, ceiling and facades). Imagine the parties and banquets there! 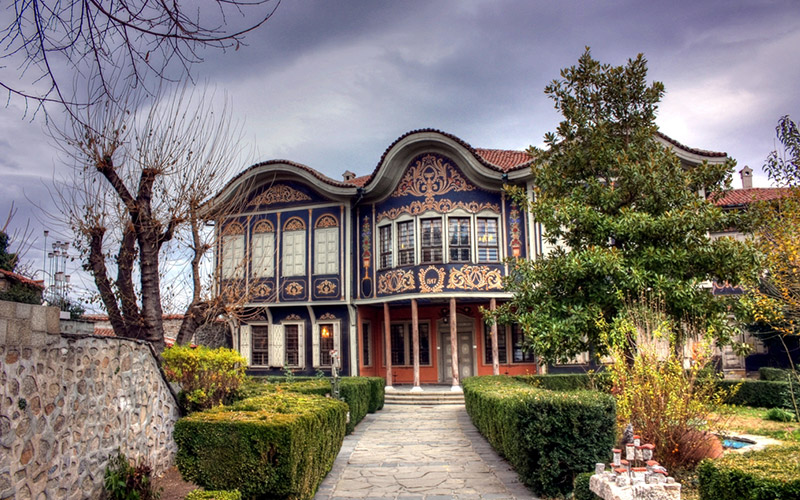 The Regional Ethnographic museum is a great place to learn more about the customs and traditions over the centuries. Here, you can see collections of copper utensils, pottery, urban interior, ornaments, hand weaved rugs and carpets. You will also find costumes from all the Bulgarian ethnic territories, as well as some musical instruments. 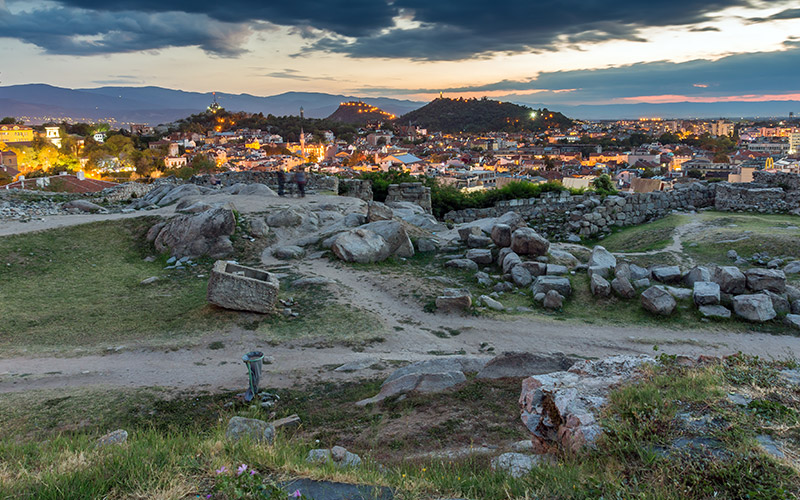 The town was first settled by the Thracians around 6th century BC. After that, it was conquered by Philip II of Macedonia in 342 BC, who rebuilt the city and expanded the fortification on Nebet Tepe. The Romans conquered Plovdiv around 72 BC. Today, Nebet Tepe is a beautiful place to stroll along the remains of their rich culture.

2/ There are impressive ruins from Roman times that you can still see around the city today.

By 46 BC, Plovdiv became part of the Roman Empire. Eventually, it grew to be the largest and most prosperous city in the province of Thrace. During that period the Romans really transformed the city.

They expanded the fortress on Nebet Tepe, created new streets, a sewage system, aqueducts. One of the most important amphitheatres in the Roman Empire, a 3000-seat stadium and a forum with Odeon were also constructed. 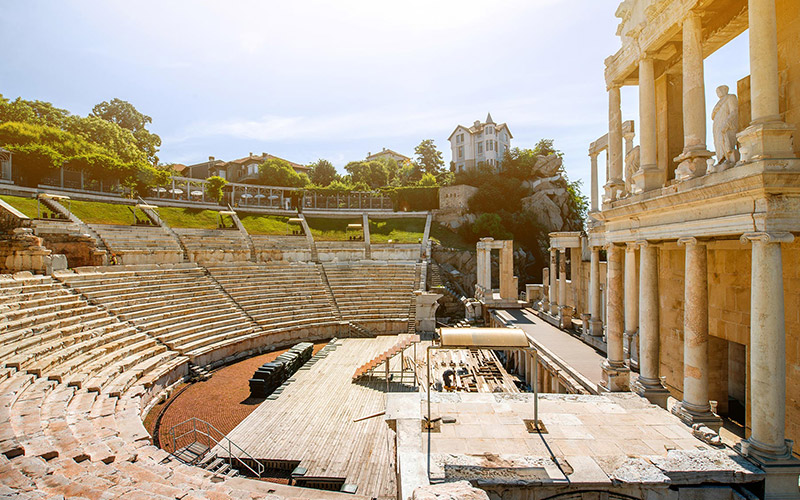 The Ancient Theatre in the Old Town of Plovdiv is one of the best preserved ancient theatres in the world and it’s still in use today for concerts, festivals and performances. The Plovdiv International Folklore Festival is held here every year. There is also an opera festival in the theatre every year in June and July.

You can visit the theatre in the day and walk around the ancient ruins for the small fee of 5 lv (2.50 euros). 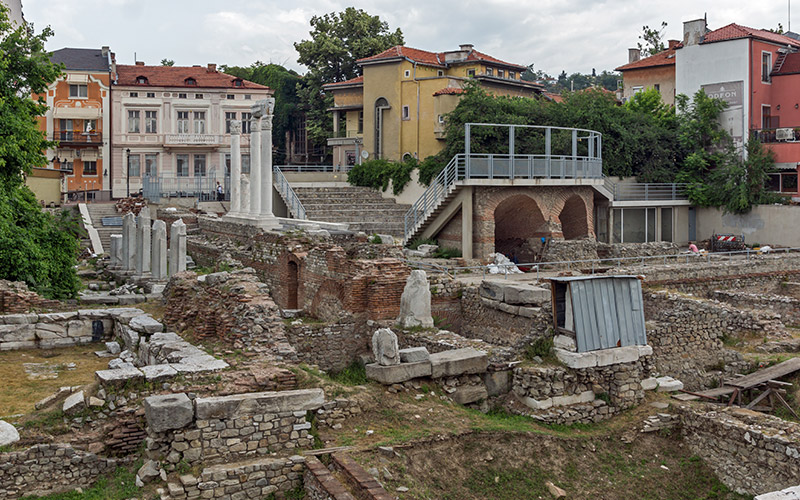 The forum was a commercial, administrative and religious centre of the ancient city. It was a place for meetings, debates, festivals, government affairs. You can find the ruins of the Ancient Forum located behind the central post office. 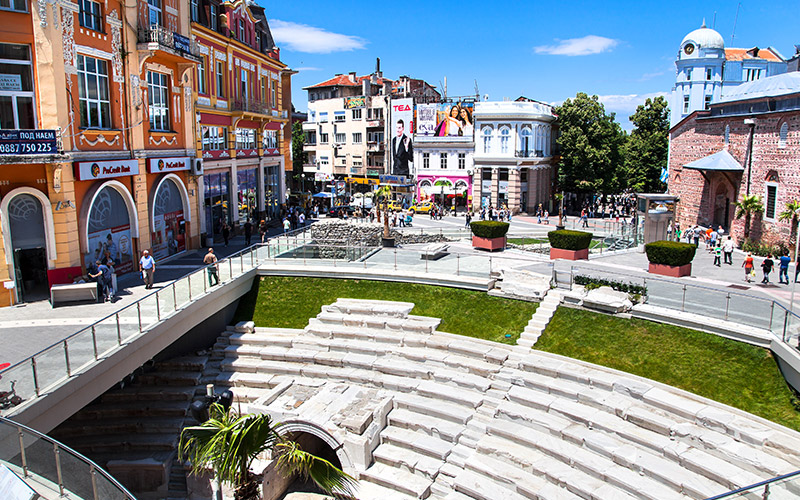 The impressive original construction had seating for over 30 000 spectators!

Located beneath modern Plovdiv at the original level of ancient Philippopolis, the Stadium was commissioned by Emperor Hadrian in the 2nd century. Visitors can now enjoy the panoramic visual replica of the original Stadium. Did we mention there’s a cafe just meters away from the ancient ruins? Yes, you can have a coffee literary in an ancient Roman stadium!

For more ideas, download the Plovdiv In Your Pocket guide > 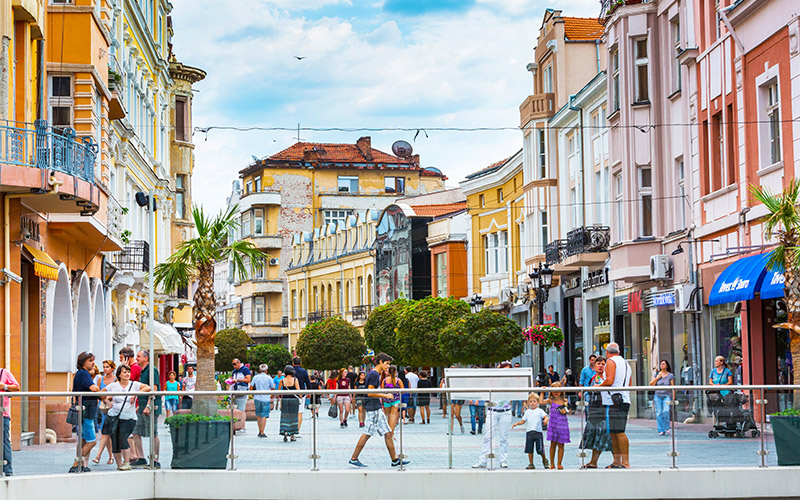 Plovdiv’s Main Street, Knyaz Alexander I, runs from the Tsar Simeon Gardens through Dzhumaya Square, at which it turns into ul. Raiko Daskalov. It then crosses the Maritsa River as a covered pedestrian bridge.

Plovdiv has a vibrant and lively city centre. It also has the longest pedestrian zone in Europe! This makes it easy for visitors to get around and get as much out of their day as possible (less time travelling). The long pedestrian street stretches across the city centre connecting it to most of the main sights of the town.

You can enter the Old Town from the centre and visit one of the many museums there, go to the trendy Kapana District for a craft beer or stroll down the Tsar Simeon Gardens for a leisure walk. If you’re in need of shopping therapy, there are many shops along the street and plenty of restaurants where you can try traditional Bulgarian food – it’s delicious!

Bulgarian people are famous for their amazing craft-making skills on the Balkans for centuries. You will be able to purchase authentic handmade products with a touch of the Bulgarian spirit and traditions. 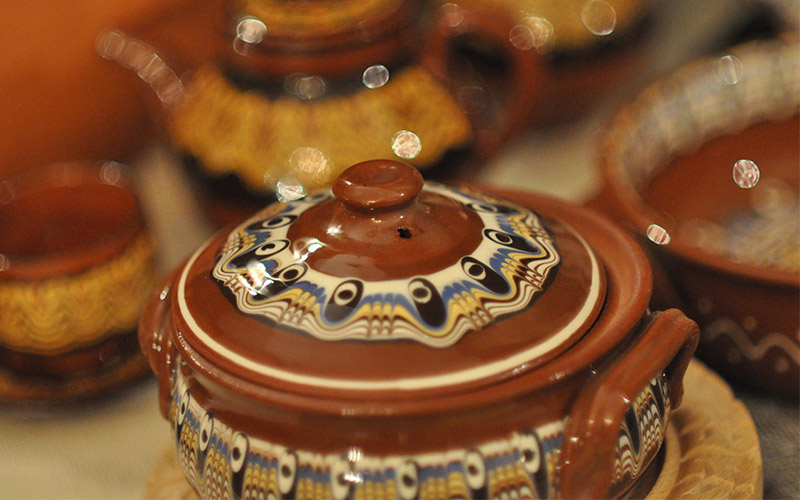 Where to get them?
If you’re looking for craft shops, local jewellery or unique fashion, head to Otets Paisiy Street, Saborna Street, and the Kapana district for some good spots to satisfy your shopping cravings. If you prefer antiques, go to the Old Town where you can find ancient paintings, icons, furniture, books and even weapons at one of the many antique stores.

5/ Plovdiv is the city of Seven Hills 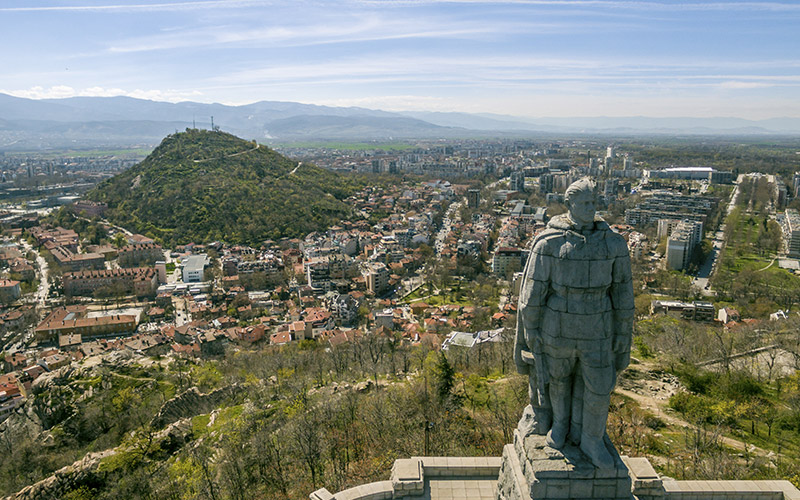 Although there are only 6 remaining hills today, they stand as a reminder of the rich historical past of Plovdiv. A natural retreat from everyday life. The two most popular hills in Plovdiv are Nebet Tepe and Youth hill.

The hills are popular weekend spots for locals who go there to relax with friends and family while enjoying the amazing panoramic views of the city. If visiting Nebet Tepe, you can combine that with a walk around the Old Town and then see the sunset over Plovdiv. Youth hill takes you even higher and you can literally see the whole city and the region, plus the walk up there is a great chance to exercise.

You can explore all these sites and learn more about their history if you join the Free Plovdiv Tour for a walk around the city.