Top 5 Houses To See In The Old Town Of Plovdiv, Bulgaria 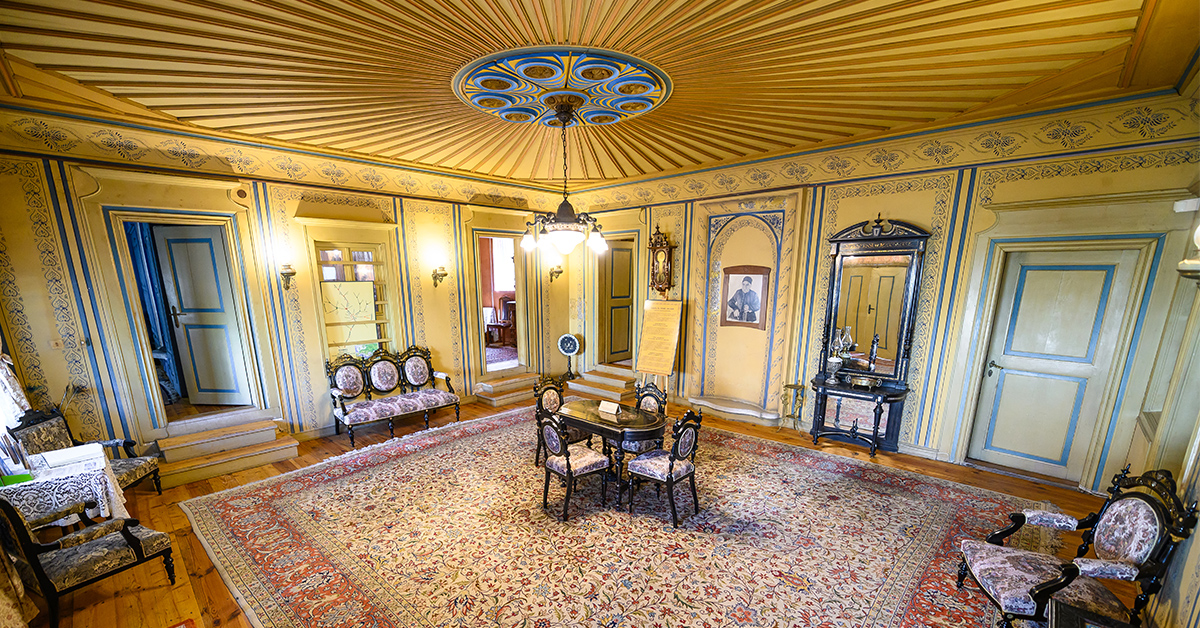 Plovdiv’s ancient past and rich cultural heritage attract thousands of tourists each year. One of the best places to go if want to learn about Plovdiv is the old part of town, which is a very special place for the locals here – and an important historical and architectural reserve. The Old Town boasts unique architectural masterpieces from the National Revival Period. The era is marked by Bulgaria’s liberation from the Ottoman empire as well as the development of the town as a prominent trading centre. Here are our top picks with some of the most unique and interesting houses to visit in the Old Town of Plovdiv! 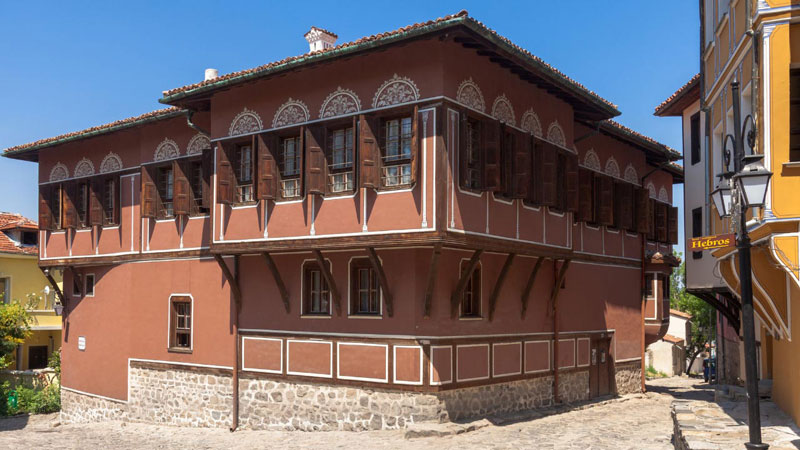 The Balabanov House is without a doubt one of the most emblematic houses in the Old Town. The impressive building was built in the 19th century and stands as a remarkable example of Bulgarian Renaissance architecture. The house has had 3 owners (wealthy local merchants) and it’s currently named after its last owner – Luka Balabanov. 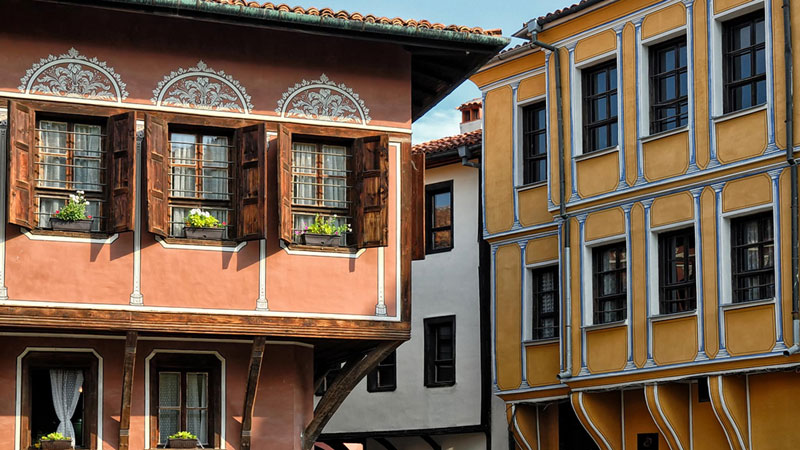 Like many other buildings in Plovdiv during the 19th century, the Balabanov House was destroyed and rebuilt several times. Nowadays the house has been beautifully refurbished and decorated, depicting perfectly just how Plovdiv’s rich merchants used to live. The second floor is perhaps the most interesting place to see. You can marvel at the carved ceilings, the details on the painted walls, the amazing handmade furniture and the classic piano. 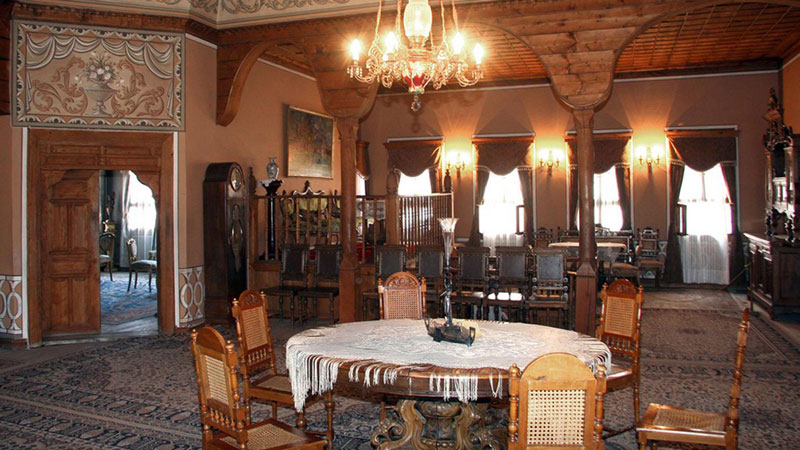 This house museum is mostly known to locals as a cultural centre where many events take place throughout the year. The Balabanov House is host to events such as concerts, exhibitions, theatrical performances and literary readings. 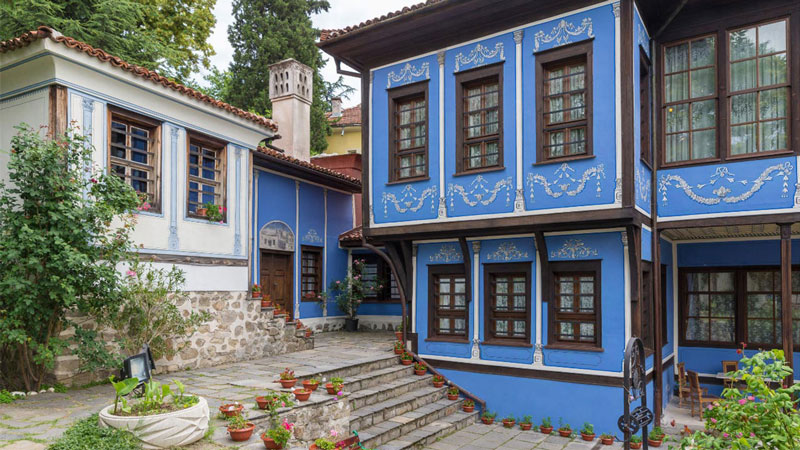 The Stepan Hindliyan House is one of the few symmetrical houses in Plovdiv, preserved in its original condition. Much like its next-door neighbour – the Balabanov House, the residence was built to be just as opulent and imposing when it comes to design and architecture. The house carries the name of its original owner who was a prominent merchant in the area back in the 19th century. His business often took him to faraway places such as India which is how he got his nickname ‘’Hindlyan’’. 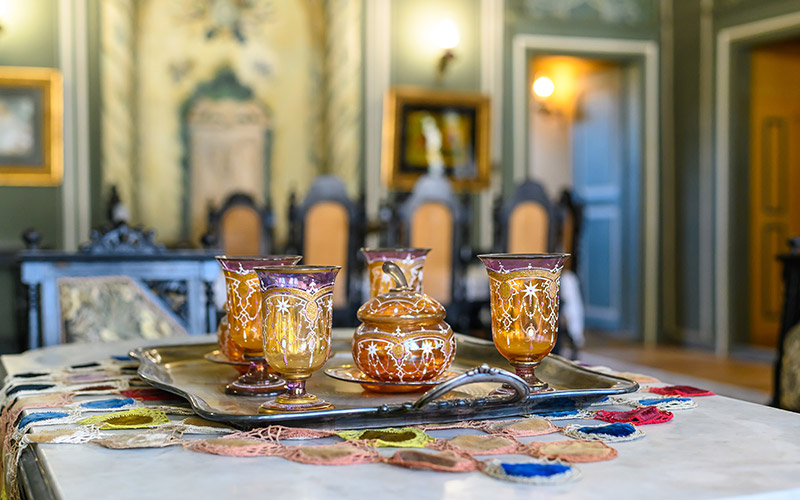 Much of the lavish decor in the house has been created by several very talented artists and painters, one of which is thought to be Italian. The first floor features wall paintings which were made using paper stencil techniques, for the first time. On the second floor, you can see the spacious hall (also referred to as hayet) which has some incredible furniture as well as unique wall decorations. Emphasis was put on using intricate geometrical designs, different architectural elements as well as floral motifs. Some of the landscapes on the walls depict views from places such as Venice, Athens, Saint Petersburg and even Lisbon. This common practice originated as more and more of the local merchants travelled, drawing inspiration from places they’ve visited. 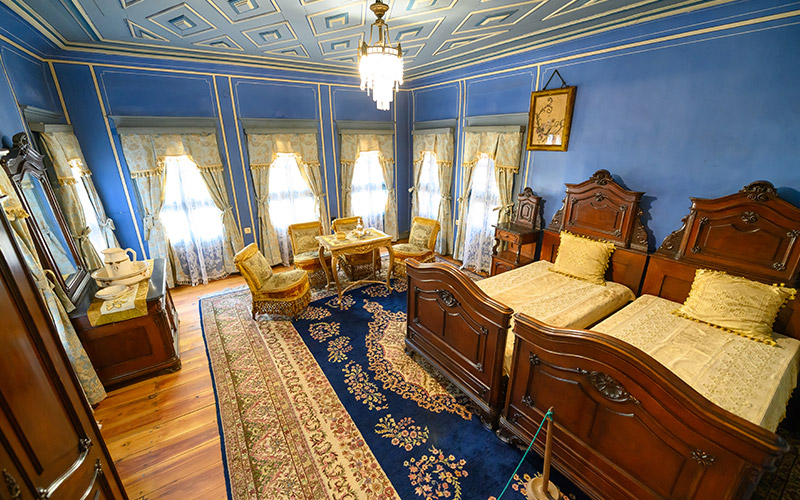 Some other interesting features of the house include the famous rose fountain on the second floor. Not only does it still work, but it also fills the entire house with the pleasant aroma of roses! You’ll also be able to see an entire perfectly restored bathroom from the period. 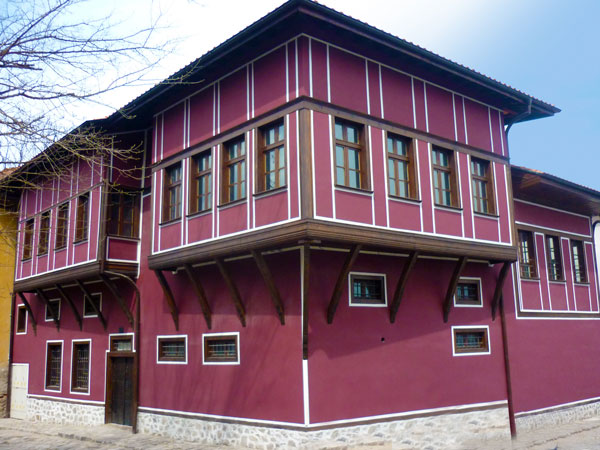 The Klanti House is actually one of the oldest houses in the reserve. It was built back in 1816, as an asymmetrical two-storey house and it belonged to a wealthy merchant – Georgi Klianti. What’s really impressive about this house is that although most of the important work on it was done during the 18th century, in the present day, up to two-thirds of the original building has been perfectly preserved, offering visitors an incredibly authentic insight into the town’s past and traditions.

Some of the most interesting features of the Klianti House are its impressive mural paintings as well as the amazing polychrome ceilings. Modern renovations have really helped draw out the unique elements of the decor and a tour around the house museum is certainly a memorable experience. A curious fact about the house is that it was built by the same craftsmen who constructed The Holy Mother Assumption Church. 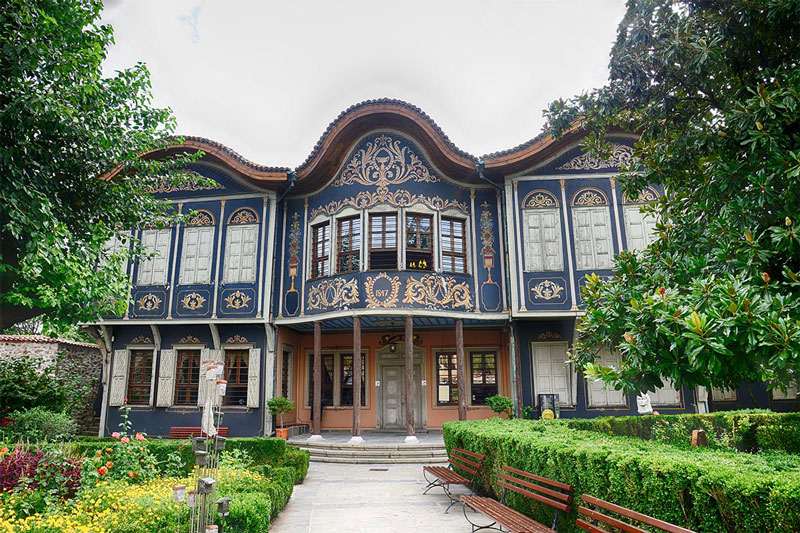 The Kuyumdzhioglu House is perhaps the most picturesque place inside the reserve of the Old Town. The house itself is absolutely stunning, both inside and out and it used to belong to an extremely wealthy merchant called Argir Hristov Kuyumdzhioglu. He was a prominent homespun trader who owned a company in Vienna and was well known in Plovdiv.

The house was built in 1847 by a master builder from the Rhodope mountains and the style in which it was created stands as one of the finest examples of mid-19th century Renaissance architecture in Plovdiv. It has a typical symmetrical facade and it is 2 stories tall. The mansion spreads over 570 square metres (6,100 sq ft), with 12 spacious rooms and with the impressive number of 130 windows! Much like the rest of the houses in the Old Town, decoration relied primarily on sophisticated floral motives and each room had a unique, hand-carved wood ceiling. Other features include an incredible yard with a garden, a well and a marble fountain. 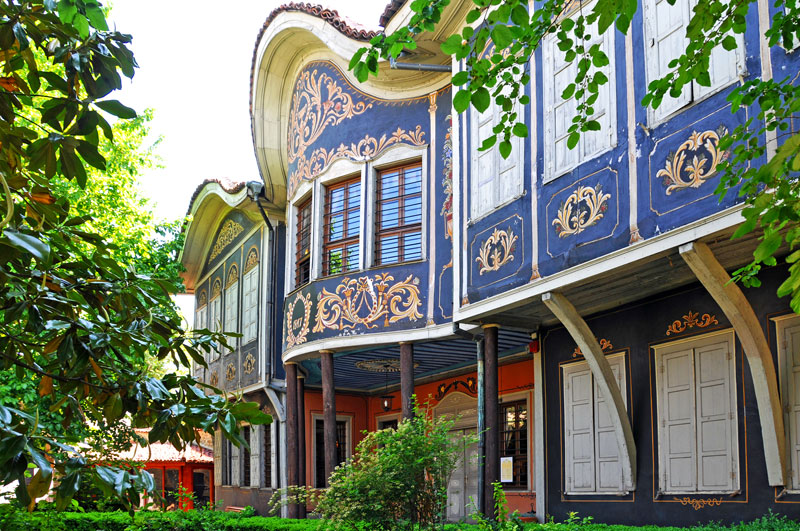 The owner of the house fled to Turkey after the liberation of Bulgaria in the 18th century. Since then the house has changed several owners including merchants and it was a girl’s boarding house at one point. Nowadays the municipality of Plovdiv has turned the mansion into a stunning, Regional Ethnographic Museum, where you can go and earn all about the region’s past, customs and traditions. 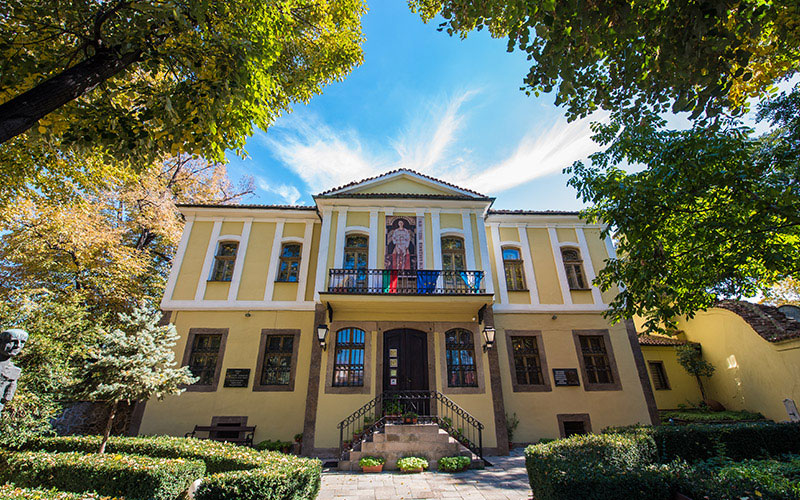 The Zlatyu Boyadzhiev Gallery is actually housed inside the former residential home of Dr Stoyan Chomakov, a notable figure from the National Revival period. He was one of the most prominent fighters for the independence of the church and he also happens to be amongst the first graduate doctors in Plovdiv. 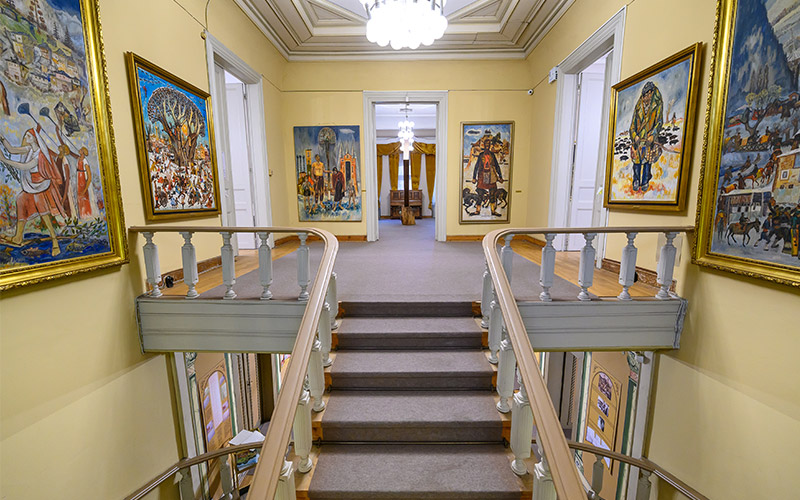 The building is yet another stunning example of a late symmetrical Renaissance house and just like the rest of the houses in the Old Town, it’s been put to good use! Since 1984 the emblematic house has been transformed into a permanent exhibition for the paintings of one of the most famous Bulgarian artists – Zlatyu Boyadzhiev. 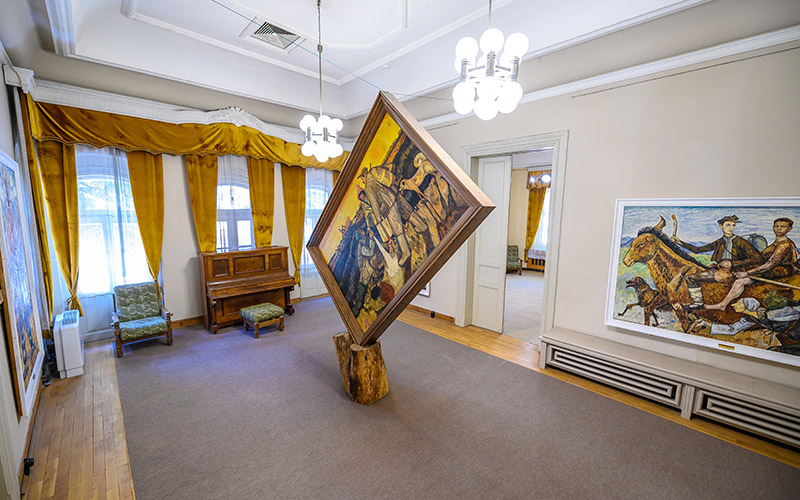 His works depict scenes from everyday life and he had a very unique approach to painting people. Although he used to paint mostly famous people, sometimes he’d use regular people as models, especially those who visited the so-called ‘milk bar’ – a popular venue at the time.

The Old Town of Plovdiv is currently on UNESCO’s World Heritage Tentative List and it’s one of the best places that you can visit on a trip to Plovdiv. If you do happen to find yourself in the cultural capital, make sure you go on a stroll down the charming cobblestone streets of the Old Town. It will be an unforgettable walk through time. And don’t forget you can save up on entrance fees with your trusted guide Plovdiv City Card!