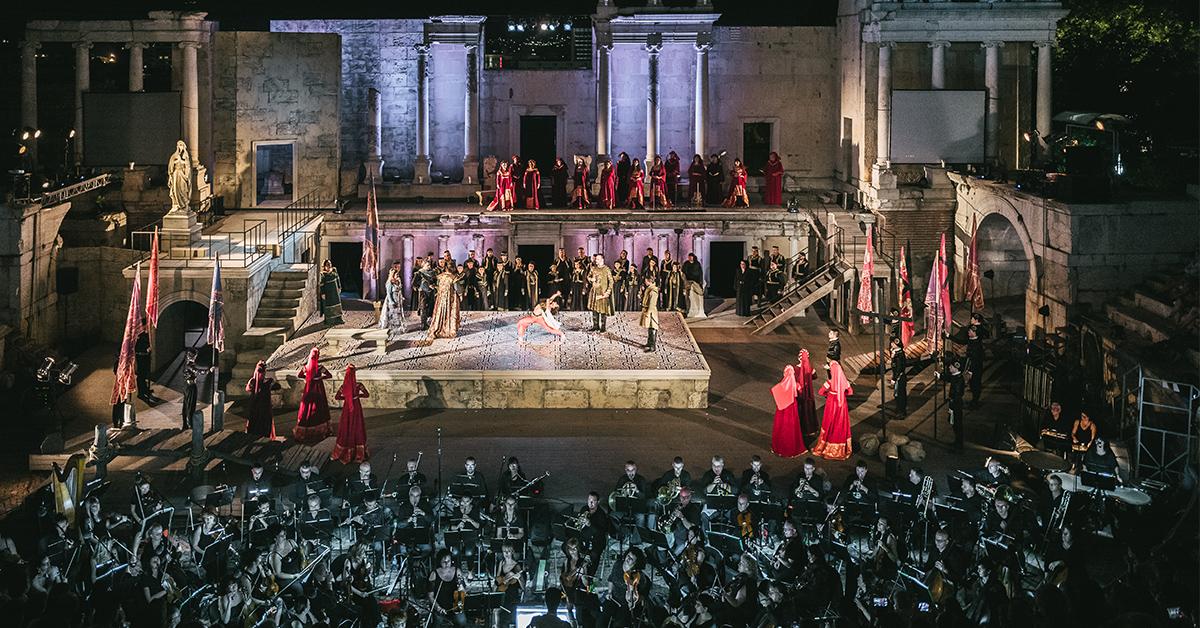 With Plovdiv proclaimed as the European Capital of Culture for 2019, it’s almost as if a new wave of culture has swept through the colourful streets of the city. Numerous events and festivals have taken place since the beginning of January and as we approach summer, you can bet the best is yet to come! Speaking of events in Plovdiv, let’s look at one of the most highly anticipated and prestigious events on the 2019 calendar – Opera Open, the spectacular opera festival which takes place at the Ancient Theatre each year! 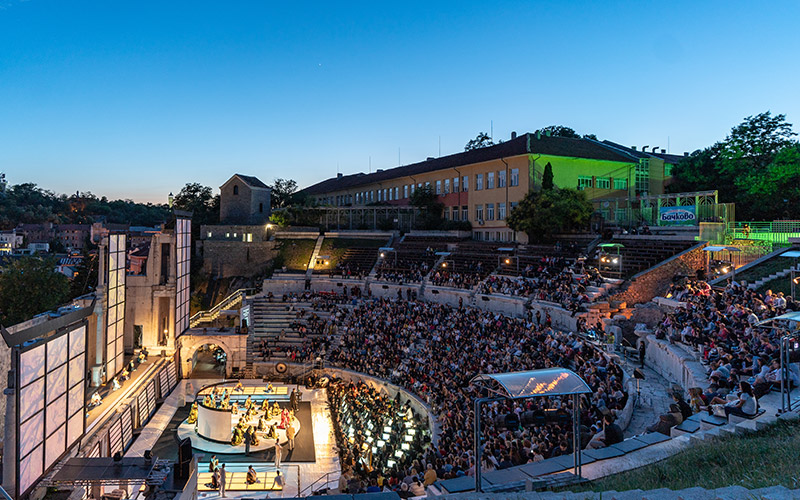 What is Opera Open?

Opera Open is a multi-genre platform involving various performances in opera, ballet, operetta, musical and ballet dancing. The annual festival is managed by the State Opera in Plovdiv and has over 35 years of tradition! The event prides itself on a strong international presence of soloists, directors, conductors and choreographers from some of the world’s largest opera theatres.

Where is it held?

The event is held at one of Plovdiv’s most iconic locations – The Ancient Theatre in the Old Town. This 2000-year-old theatre was once used by the Roman empire and it certainly makes for an incredible venue. Due to increased interest in the event, the visitors and citizens of Plovdiv can now enjoy regular performances in June, July as well as August. 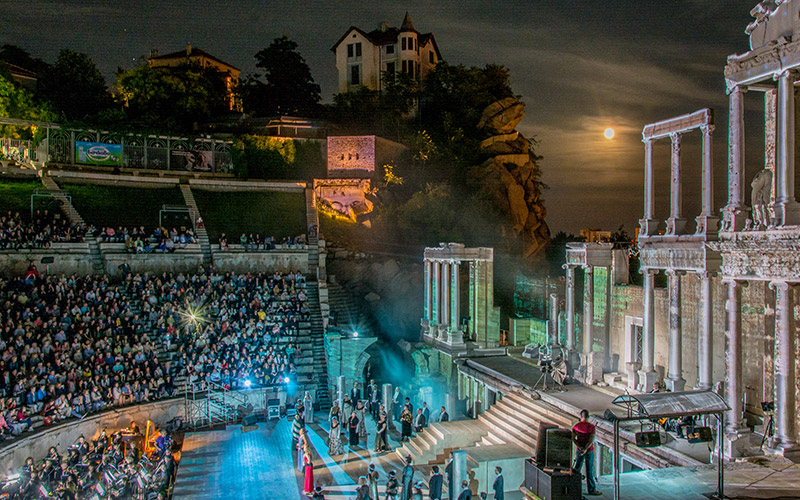 A directed walk through classic musical styles and epochs, accompanied by a unique light show and 3D mapping!

The Grand Gala Opening will take place at the Ancient Theatre on June 8th. The one of a kind music and light show poses a real creative and technical challenge that’s set to be something truly unforgettable. The concert will surprise the audience by ‘’switching’’ their perspective and placing them on the stage, rather than the usual stone rows.

The white stone rows will serve as a “canvas”, which will be filled with multimedia content by the visual artists Petko Tanchev and Atanas Danchev from Senseslab. The program will also feature the music of Skryabin, Messian, Verdi, Nenov, Wagner, Okegem, Spassov. For the event, Maestro Dian Chobanov will have the largest symphony orchestra in the history of Opera Open.

This beautiful spectacle will be conducted by the genius director, artist and choreographer Stefano Poda. The original scenography was inspired by the rich cultural heritage of the Thracian and Orpheus lands, as well as by ancient pagan rituals such as fire-dancing.

Stefano Poda’s style focuses on building grand visual spectacles and performances worth remembering. For the Ancient Theater, he plans to include more than 100 volunteers on stage who will embody a large variety of people and races. Part of his bold decision also includes the construction of an actual river with a waterfall and a sandy beach on the stage of the Ancient Theater. The building of such decor has never before been attempted at the Ancient Theatre.

The leading artist will present a rich performance combining classical music, antique heritage, Thracian mythology, ethnicity and contemporary elements of modern Plovdiv. The role of Orpheus will be played by star countertenor Antonio Giovanni – one of the rarest opera voices! 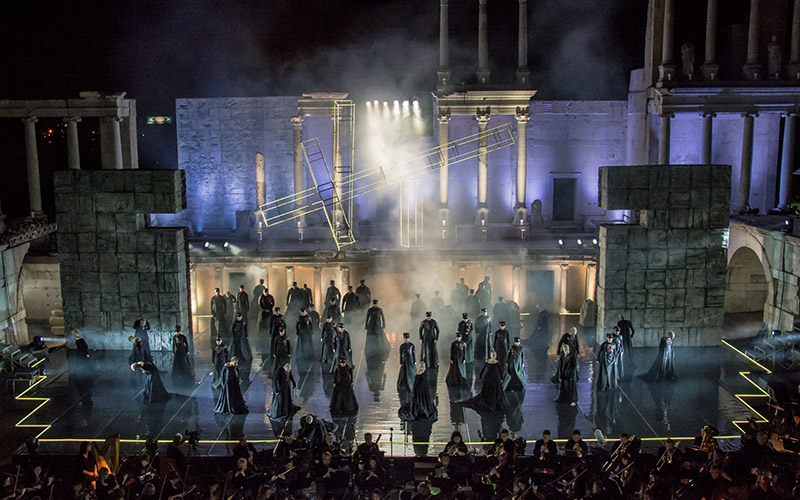 This will be the second performance spectacle conducted by Stefano Poda on the stage of the Ancient Theatre. The production is part of Teatro Reggio di Parma from the program of Verdi Festival in Italy. The skilful handling of texture, shades, symbols, and a formalized movement make this one of Verdi’s most difficult operas to perform. 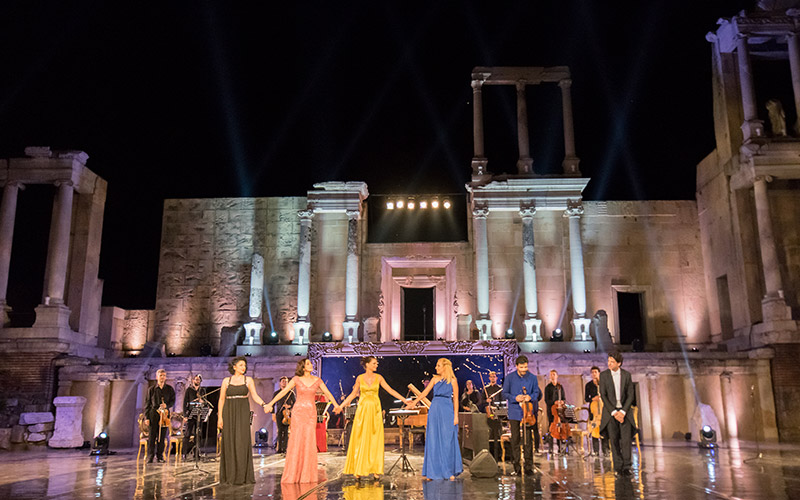 In the Ancient Theatre, 12 priceless instruments from the age of STRADIVARIUS will get a chance to play. The prominent musicians from Stradivarius Orchestra (Netherlands), led by the virtuoso Razvan Stoica, will present a new programme for the landmark 2019. Soloists of Opera Plovdiv will complement the unique sound of some of the world’s finest string instruments.

This year, director Acad. Plamen Kartalov (director of the Sofia Opera and Ballet) will get to direct one of Verdi’s most beloved works and present it to audiences in the Ancient Theatre. The role of the jester will be played by one of the most dramatic baritone voices today – Carlos Almagger.

On the 16th of July, visitors of the Ancient Theatre will get to enjoy a concert of the high-profile jazz singer Lizz Wright (USA). She will perform alongside the Orchestra of Opera Plovdiv in one truly amazing spectacle. The albums of Lizz Wright reached number 1 in Billboard magazine’s chart for contemporary jazz in 2005 and 2006. Her work includes a blend of jazz and pop as well as gospel standards. The project is implemented in partnership with the Plovdiv Jazz Fest. 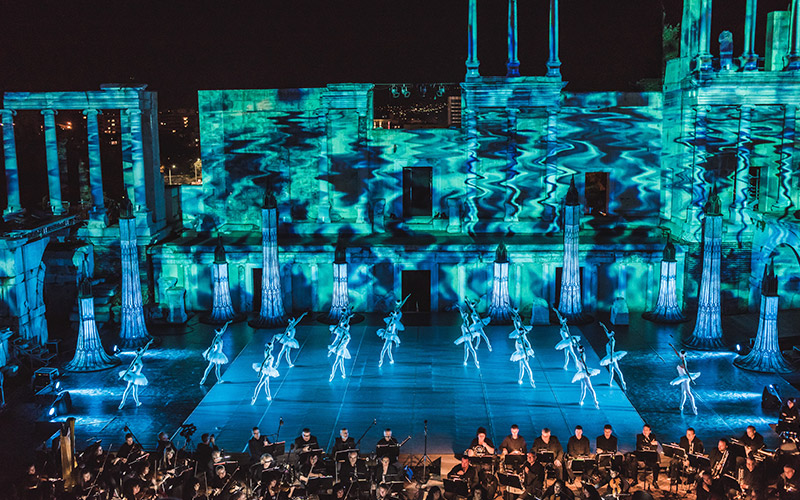 The most famous ballet title returns to the Ancient Theatre, this time with a new production by the famous Russian choreographer Konstantin Uralsky – a longtime soloist at the Bolshoi Theater, later an artistic director of the Iowa Ballet (USA) and chief ballet master of the Astrakhan Opera and Ballet Russia. The spectacle will feature premier soloists at the Moscow Academic Musical Theater. 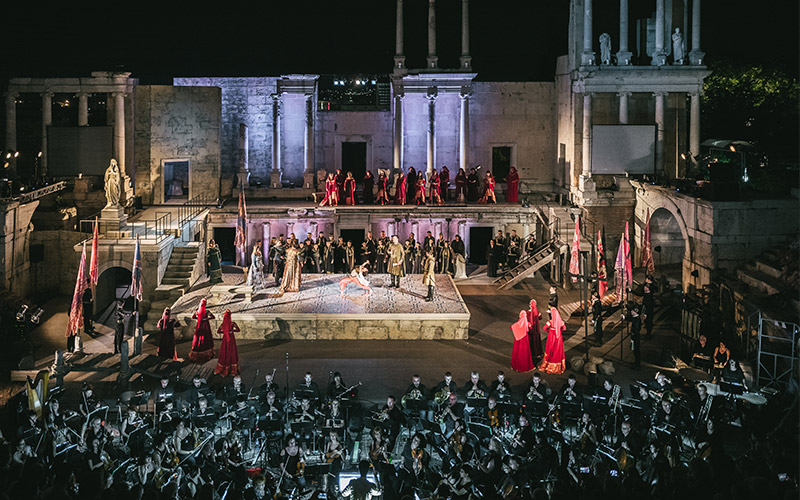 Leading tenor José Cura (Argentina), one of the most prominent performers of the Othello part, accepted the invitation of Opera Plovdiv to participate in the performance of Assoc. Prof. Nina Naydenova.

In the Metropolitan Opera, he received the title “Fourth Tenor in the World” after Pavarotti, Domingo and Carreras. Jose Kura is world famous for his original opera interpretations, non-traditional and innovative concert appearances, a mesmerizing stage presence, and the notable fact that besides a brilliant performer, he is an educated conductor and talented composer.

Opera Open will continue in August 2019 with a repeat of the summer premieres – ‘Orpheus’ and ‘Rigoletto’, as well as an International Ballet Gala with fragments of popular ballet works. As traditionally Opera Open will conclude with Verdi’s ‘Aida’ with the participation of soloists from Arena di Verona. 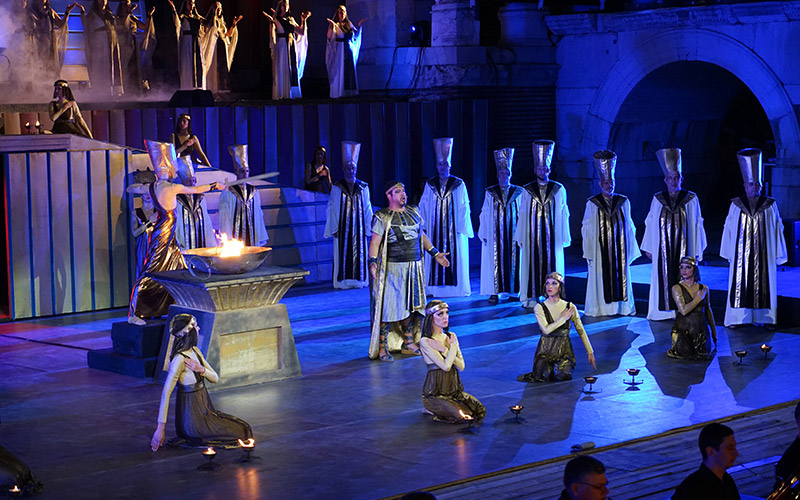 The most popular opera performance of the Ancient Theatre – “Aida” by Verdi, will be the closing show of Opera Open. The stellar composition of Bulgarian soloists with an international career is joined by the baritone Kiril Manolov for the first time.

Tickets for Opera Open are sold at the ticket office of the Ancient Theatre (south entrance) – and we have a surprise for you! With Plovdiv City Card, you will get 5 BGN off your 30 BGN ticket >>